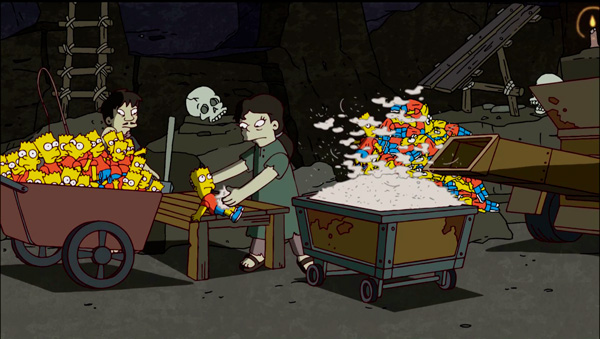 Sitting in his lively studio in western Seoul, veteran animator Nelson Shin is clearly proud of the fact that he’s helped animate The Simpsons since the show first aired in 1989. The iconic cartoon propelled his production company Akom into becoming an overseas contracting hub for a lineup of Saturday-morning classics, including X-Men, Tiny Toon Adventures and Animaniacs.

But when a California-based production studio asked Shin to animate a dark commentary about labor practices in Asia’s cartoon industry — the edgy title sequence for the The Simpsons’ episode “MoneyBART” — he and his staff raised a rare protest. The sequence, created by Banksy, the pseudonym for an unidentified British graffiti artist known for his anti-Establishment pranks, ran during the opening credits — a regular slot known to Simpsons fans as the “couch gag” because it’s a joke thrown in as the Simpsons family is seen gathering on the couch at the start of each episode. It depicted a dungeon-like complex where droning Asian animators worked in sweatshops, rats scurried around with human bones, kittens were spliced up into Bart Simpson dolls, and a gaunt unicorn punched holes into DVDs.

1 Reply to "South Korean Cartoonists Cry Foul Over The Simpsons"