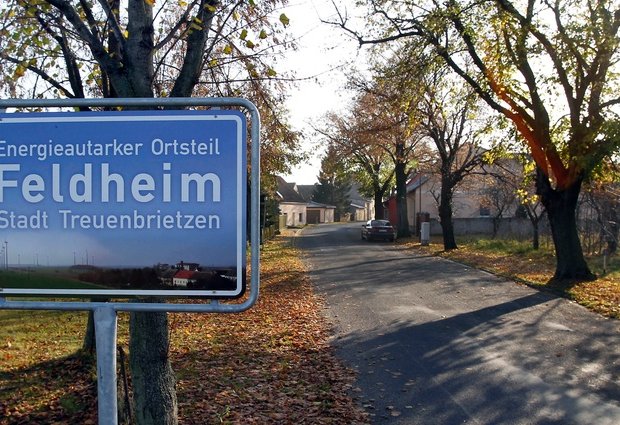 This tiny village of 37 gray homes and farm buildings clustered along the main road in a wind-swept corner of rural eastern Germany seems an unlikely place for a revolution.

Yet environmentalists, experts and politicians from El Salvador to Japan to South Africa have flocked here in the past year to learn how Feldheim, a village of just 145 people, is already putting into practice Germany’s vision of a future powered entirely by renewable energy.

Chancellor Angela Merkel’s government passed legislation in June setting the country on course to generate a third of its power through renewable sources — such as wind, solar, geothermal and bioenergy — within a decade, reaching 80 percent by 2050, while creating jobs, increasing energy security and reducing harmful emissions.

The goals are among the world’s most ambitious, and expensive, and other industrialized nations from the U.S. to Japan are watching to see whether transforming into a nation powered by renewable energy sources can really work.

“Germany can’t afford to fail, because the whole world is looking at the German model and asking, can Germany move us to new business models, new infrastructure?,” said Jeremy Rifkin, a U.S. economist who has advised the European Union and Merkel.

In June, the nation passed the 20 percent mark for drawing electric power from a mix of wind, solar and other renewables. That compares with about 9 percent in the United States or Japan — both of which rely heavily on hydroelectric power, an energy source that has long been used.

Expanding renewables depends on the right mix of resources, as well as government subsidies and investment incentive — and a willingness by taxpayers to shoulder their share of the burden. Germans currently pay a 3.5 euro cent per kilowatt-hour tax, roughly euro157 ($205) per year for a typical family of four, to support research and investment in and subsidize the production and consumption of energy from renewable sources.

That allows for homeowners who install solar panels on their rooftops, or communities like Feldheim that build their own biogas plants, to be paid above-market prices for selling back to the grid, to ensure that their investment at least breaks even.

Critics, like the Institute for Energy Research, based in Washington, D.C., maintain such tariffs put an unfair burden of expanding renewables squarely on the taxpayer. At the same time, to make renewable energy work on the larger scale, Germany will have to pour billions into infrastructure, including updating its grid.

Key to success of the transformation will be getting the nation’s powerful industries on board, to drive innovation in technology and create jobs. According to the Environment Ministry, overall investment in renewable energy production equipment more than doubled to euro29.4 billion ($38.44 billion) in 2011. Solid growth in the sector is projected through the next decade.

Some 370,000 people in Germany now have jobs in the renewable sector, more than double the number in 2004, a point used as proof that tax payers’ investment is paying off.

Feldheim has zero unemployment — despite its tiny size — compared with roughly 30 percent in other villages in the economically depressed state of Brandenburg, which views investments in renewables as a ticket for a brighter future. Most residents work in the plant that produces biogas — fuel made by the breakdown of organic material such as plants or food waste — or maintain the wind and solar parks that provide the village’s electricity.

But it’s not only in the country. Earlier this month in Berlin, officials unveiled a prototype of a self-sustaining, energy-efficient home, built from recycled materials and complete with electric vehicles that can be charged in its garage.

The aim of the prototype home is to produce twice as much energy as is used by a family of four — chosen from a willing pool of volunteers who will be selected to live in the home for 15 months — through a combination of solar photovoltaics and energy management technology, in order to show the technology already exists to allow people to be energy self-sufficient.

“We want to show people that already today it is possible to live completely from renewable energy,” said German Transport Minister Peter Ramsauer as the project, dubbed “Efficiency House Plus,” was unveiled. The house is part of a wider euro1.2 million ($1.57 million) project investing in energy-efficient buildings.

“The Efficiency House Plus will set standards that can be adopted by the majority in the short term,” Ramsauer told The Associated Press. “The basic principle is that the house produces more energy than needed to live. The extra energy is then used to charge electric-powered cars and bicycles or sold back to the public grid.”

Germany’s four leading car makers are also participating in the project with BMW AG, Daimler AG, Volkswagen AG and Opel, which is part of Buick’s parent company, General Motors Co., each making an E-car for use by in the home.

What Next for the African Union in 2012?