Adie: Mirijana was so nice to send me this short but sweet report of the Linkin Park concert in Bucharest/Romania. Thanks for that!

After a 13 hours long trip we finally got there. We had tickets for the Golden Ring. As my friends and I wanted to be in 1st row we had to stand in crowd and wait for the doors to open.
At first it was raining,but no one cared. Luckily,the sun came up after few minutes. When they opened the door we all started to run as fast as we could. Few seconds later I was there – in the 1st row, at my 1st LP show. What I felt cannot be described with words.
Before LP there were 3 supporting Romanian bands: PhenomenOn, Coma , Zdob si Zdub (hope I spelled them right).
At 8:15 Linkin Park finally came on the stage (Mr.Hahn came on first ). You could hear Soldiers screaming: Linkin Park! Linkin Park! The concert started with TINFOIL and continued with FAINT.
Before LIES GREED MISERY Mike apologised to us because we had to wait so long for them to come, and thanked us for being so patient.
The energy during the whole concert was just amazing. We were jumping all the time, screaming and singing with Chester and Mike. But LOATR/SOTD/Iridescent was about to start. Silence. Chester starts:˝I dreamed I was missing,you were so scared…˝ I looked around and saw few fans who were crying and singing at the same time. Amazing.
The last one was of course BLEED IT OUT(SABOTAGE). 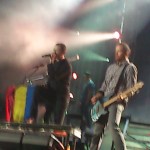 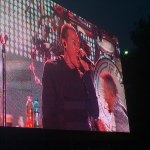 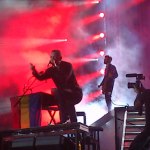 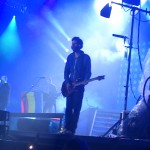 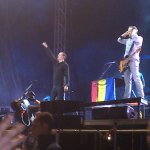 1 Reply to "Fan Review: Linkin Park in Romania By Mirjana"