“Power the World”-Week Issue #1: A Light in India 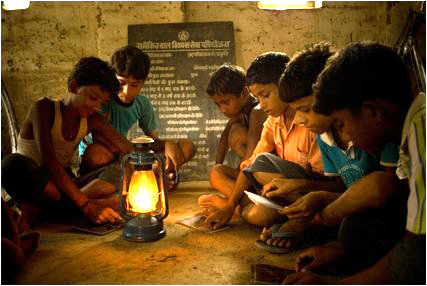 Students in the village of Tahipur in Bihar used kerosene lanterns for studying.

When we hear the word innovation, we often think of new technologies or silver bullet solutions — like hydrogen fuel cells or a cure for cancer. To be sure, breakthroughs are vital: antibiotics and vaccines, for example, transformed global health. But as we’ve argued in Fixes, some of the greatest advances come from taking old ideas or technologies and making them accessible to millions of people who are underserved.

One area where this is desperately needed is access to electricity. In the age of the iPad, it’s easy to forget that roughly a quarter of the world’s population — about a billion and a half people (pdf) — still lack electricity. This isn’t just an inconvenience; it takes a severe toll on economic life, education and health. It’s estimated that two million people die prematurely each year as a result of pulmonary diseases caused by the indoor burning of fuels for cooking and light. Close to half are children who die of pneumonia.

In vast stretches of the developing world, after the sun sets, everything goes dark. In sub-Saharan Africa, about 70 percent of the population lack electricity. However, no country has more citizens living without power than India, where more than 400 million people, the vast majority of them villagers, have no electricity. The place that remains most in darkness is Bihar, India’s poorest state, which has more than 80 million people, 85 percent of whom live in households with no grid connection. Because Bihar has nowhere near the capacity to meet its current power demands, even those few with connections receive electricity sporadically and often at odd hours, like between 3:00 a.m and 6:00 a.m., when it is of little use.

This is why I’m writing today about a small but fast-growing off-grid electricity company based in Bihar called Husk Power Systems. It has created a system to turn rice husks into electricity that is reliable, eco-friendly and affordable for families that can spend only $2 a month for power. The company has 65 power units that serve a total of 30,000 households and is currently installing new systems at the rate of two to three per week.

Bringing sustainable light to communities off the grid

Husk Power was founded by four friends: Gyanesh Pandey, Manoj Sinha, Ratnesh Yadav and Charles W. Ransler, who met attending different schools in India and the United States. Pandey, the company’s chief executive, grew up in a village in Bihar without electricity. “I felt low because of that,” he told me when we met recently in New Delhi. He decided to study electrical engineering. At college in India, he experienced the Indian prejudice against Biharis — some students refused to sit at the same table with him — which contributed to his desire to emigrate to the U.S.. He found his way to the Rensselaer Polytechnic Institute, in Troy, N.Y., where he completed a master’s degree before landing a position with the semiconductor manufacturer International Rectifier in Los Angeles. His job was to figure out how to get the best performance from integrated circuits at the lowest possible cost. This helped him develop a problem-solving aptitude that would prove useful for Husk Power.

He was soon earning a six-figure income. He bought his family a diesel-powered electric generator. As a single man living in Los Angeles, he enjoyed traveling, dining out and going to clubs. “I was basically cruising through life,” he recalled. “But along with that pleasure and smoothness was a dark zone in my head.” He began meditating — and he realized that he felt compelled to return home and use his knowledge to bring light to Bihar.

Back in India, he and his friend Yadav, an entrepreneur, spent the next few years experimenting. They explored the possibility of producing organic solar cells. They tried growing a plant called jatropha, whose seeds can be used for biodiesel. Both proved impractical as businesses. They tested out solar lamps, but found their application limited. “In the back of my mind, I always thought there would be some high tech solution that would solve the problem,” said Pandey.

One day he ran into a salesman who sold gasifiers — machines that burn organic materials in an oxygen restricted environment to produce biogas which can be used to power an engine. There was nothing new about gasifiers; they had been around for decades. People sometimes burned rice husks in them to supplement diesel fuel, which was expensive. “But nobody had thought to use rice husks to run a whole power system,” explained Pandey.

In Bihar, poverty is extreme. Pretty much everything that can be used will be used — recycled or burned or fed to animals. Rice husks are the big exception. When rice is milled, the outside kernel, or husk, is discarded. Because the husk contains a lot of silica, it doesn’t burn well for cooking. A recent Greenpeace study (pdf) reports that Bihar alone produces 1.8 billion kilograms of rice husk per year. Most of it ends up rotting in landfills and emitting methane, a greenhouse gas.

Read the rest of the article by DAVID BORNSTEIN and check out this video from Ashish Gambhir from Bahir. He installed a stand alone solar system for his grand parents!

No Replies to ""Power the World"-Week Issue #1: A Light in India"