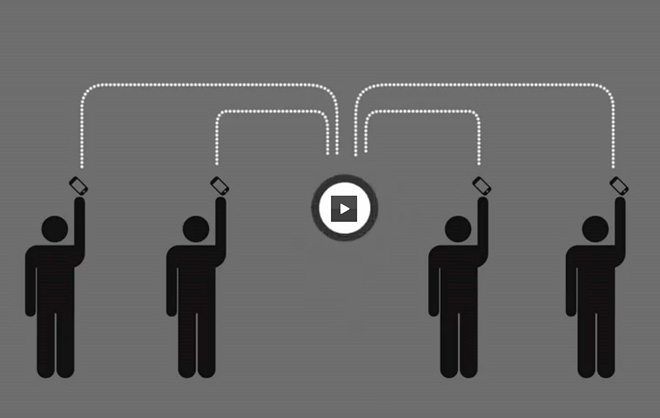 Attending a show is different now. Everybody’s holding up a cellphone shooting video instead of watching and listening. This doesn’t have to be a 100-percent bad thing, however.

A startup called OutListen intends to turn this sow’s ear into a silk purse by encouraging concertgoers to upload their smartphone footage to an online calendar. If enough people upload footage from the same show, OutListen will cobble it all together by syncing the audio waveforms (clever), so that the band (or more likely their “people”) can add the high-quality audio track they hopefully remembered to record at the show, and then release the result as a new type of music product: the crowdsourced concert video.

According to its teaser video, OutListen will be a “user-generated media database for live concerts and events catering mainly but not exclusively to performing musical groups … [and it is] designed to be the place where live music lives on the internet, where lovers of performers can view, share and combine their own personal concert footage all in one place.”

The sound quality of many cellphone show recordings is the pits (although that situation has improved a great deal; I shot this Javelin footage with an iPhone 4 at Terminal 5 in New York, and the sound turned out OK, whereas my old FlipCam would distort the heck out of amplified sound).

OutListen solves that problem, assuming that participating bands record their shows using something that sounds decent — ideally by plugging a recorder right into the mixing desk, which isn’t very hard. (Bonus: The band, not their label, then owns this sound recording and can sell it and these OutListen videos without giving the money to anyone except the songwriter/publisher.)