My Favourite Albums of 2011 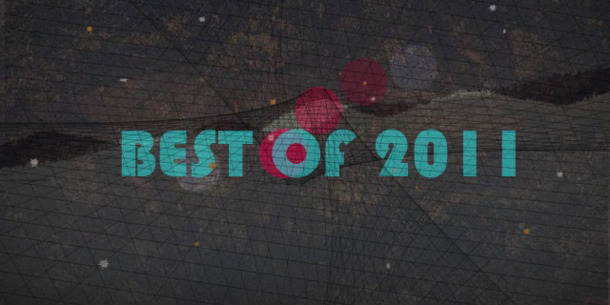 Looking back at 2011 (yes, it’s THAT time again), I feel that this year was an amazing year for music. There were so many really good albums released, I thought I should make a list with my ten favourite albums of 2011. This list is totally subjective, of course, so don’t be surprised if you can’t find some of the year’s most successful albums in it (e.g. Adele, Coldplay).

I used to listen to a lot of rap music when i was in my teens, but then turned to rock music when i got a bit older. Even though I still listened to some rap artists like Eminem, Jay-Z and Kanye West, I wasn’t really enthusiastic about that genre anymore. Tyler the Creator’s “Goblin” totally changed that! I love Tyler’s puristic style and his bold and pretty crude lyrics. I’ve bought “Goblin” together with Kanye’s and Jay-Z’s much-anticipated “Watch the Throne” album, but surprisingly ended up preferring the minimalistic “Goblin” over “Watch the Throne”. Like Eminem, Tyler is much criticized for his misogynistic and homophobic lyrics, but in my opinion people take this too serious. To quote Tyler: “It’s fucking fiction!” Best songs: “Yonkers”, “Radicals”, “Tron Cat”, “Nightmare”

I’ve just recently purchased Rebecca Ferguson’s debut album “Heaven” and was totally blown away. As I am German and don’t really follow British or American casting shows, I didn’t know her at all until I’ve heard her first single online. She’s got such a powerful voice! She’S Definitely one of the best female singers at the moment!
If you like Amy Winehouse, Alicia Keys, Beyoncé and/or Adele, you should definitely check her out. Best songs: “Shoulder To Shoulder”, “Glitter & Gold”, “Nothing’s Real but Love”, “Mr. Bright Eyes”

Laura Marling is one of the best folk singers existing! Her lyrics are pure poetry and her third album “A Creature I don’t know” is as awesome as her other albums “I speak because I can” and “Alas I cannot swim”. Best songs: “Salinas”, “Don’t ask me why”, “Sophia”

As a huge Rihanna fan I really anticipated her sixth studio album “Talk that Talk” but was really disappointed when I’ve listened to it for the first time. I feel that the album was a bit rushed because of her huge success with “Loud”. Even though the album is good and definitely a must have, especially for Rihanna fans, it just doesn’t take her music to the next level. It’s probably a bit harsh to say that, but she has proven already that she can make catchy pop tunes, now it’s time to show us that she can do some music with real quality. There are so many awesome songs on “Talk that Talk” that have a lot of potential like “We found love”, “Cockiness”, “Where have you been” or “We all want love”, but there are just too many repetitions of the verses and refrains. I got tired of the album a bit too quickly. I hate to say this, but maybe she should take some time off to write some really great new music. Best songs: “We found love”, “Cockiness”, “Where have you been”, “We all want love”, “Drunk on love”

6. Korn – The Path of Totality

For “The Path of Totality” Korn worked with Dubstep producers like Skrillex, Noisia and Downlink and so chose a slightly new direction for their sound. I must say that dubstep really works for Korn. The songs are catchy and i feel like TPoT is one of Korns best albums. It’s really annoying that there are so many fans that always have to criticize bands when they evolve their sound. The same happened to Linkin Park when they decided to try new things instead of just copying their old albums. A totally different case is Limp Bizkit who even admitted to hating the “nu metal” sound but still kept to it, because their fans wanted them to. I think, eventually, you have to decide for yourself what you prefer. I personally definitely prefer a more mature and new sound like Korn’s or Linkin Park’s. Best songs: “Chaos lives in everything”, “Narcissistic Cannibal”, “Get up!”

This was one of my most played albums in 2011. The White Lies are just really awesome and “Ritual” has many great songs like “Bigger than us” or “Strangers”. This is a must have! Best songs: “Bigger than us”, “Strangers”, “Bad love”, “The Power and the glory”, “Holy Ghosts”

Evanescence had an awesome comeback with their newest self titled album. The first single “What you want” is really catchy and one of the songs I listened to most in 2011. Best songs: “What you want”, “My heart is broken”, “Lost in paradise” & “Swimming Home”

“Wounded Rhymes” is so awesome it just had to be in my Top 3 albums of 2011. Swedish artist Lykke Li is one of the best female singers and songwriters in my opinion. I love every single track of “Wounded Rhymes”, which is her second studio album, the lyrics are great and the melodies are catchy as hell! Best songs: “Get some”, “I follow rivers”, “I know places” & “Sadness is a blessing”

When I listened to Beyoncé’s newest album “4” for the first time, I was really disappointed, because, except for “Run the World”, there just wasn’t another club song like “Single Ladies”, “Diva” or “Sweet Dreams”, but damn, this album is a grower! Instead of following the newest trend for dance music á la Rihanna, Beyoncé decided to go for a laid back 80s/90s soul sound. The songs are just pure fun and now I love every single one of them. This is definitely an album that I won’t get tired of so soon. Best songs: “I miss you”, “Rather die young”, “Start over”, “Countdown”, “The end of time”, “Love on Top”

As I am a huge fan of Florence and her Machine, I’ve anticipated this album like non other and it’s sooo great! After the first listen I felt a bit overwhelmed, because the sound is really rich and loud with layered vocals and probably every instrument available, but I got used to it pretty soon and “Ceremonials” is definitely my most favourite album of 2011! Every song is an awesome experience, lyrically and musically, and I can’t wait for March 2012 when I will finally see Florence live! Best songs: “Shake it out”, “No light, no light”, “Never let me go”, “Breaking Down”, “Only if for a night”, “Spectrum”, “What the water gave me”….