Linkin Park at AAC, Dallas: A Night Terror Delivered Via Subwoofer Meets The “Essence of Shinoda” 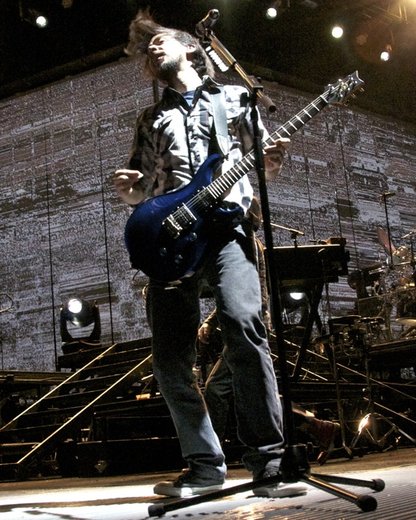 Zara from mikeshinodaclan.com just tweeted this concert review from Linkin Park’s show in Dallas. It’s pretty on point and funny at all the right places, so read! Thanks, Zara!

I’m not saying he’s not a man’s man, but Chester Bennington used to drive a sparkly silver PT Cruiser. I know this because he used to live next door to my good friend, and he did not utilize his parking garage. But perhaps he doesn’t need a fancy SUV; he has the grandeur of a world tour, and an arena full of cheering fans that live for the sensation that is Linkin Park.

A show postponed by a bout of illness, the size of the audience at American Airlines Center has not been thwarted. “You ready to have some fun?” Chester asks the crowd. As the band opens with “Faint,” his vocals prove to be a bit ahead of the beat, but unharmed, nonetheless.

It must take a lot to muster up the anger that rides out of one’s throat and hits one’s ears, like a night terror delivered via subwoofer each performance. On “Lying From You” and “Given Up,” I now understand why it was imperative they cancel the first show. I don’t remember this much screaming on their recorded tracks, but I once encountered a similar experience with Dave Grohl’s pipes at a Foo Fighters concert. Dude can scream.

The floor fervently fist-pumps each syllable of ‘hypocrite’ during “No More Sorrow,” and “What I’ve Done” elicits a jolt in my ankle muscles that progresses up my spine resulting in a foot tap a head nod. I will say, Green Day’s comeback was terrible; RHCP will never be the same, but Linkin Park has kept their sound consistent throughout the years. As long as gauged ears have been popular, Linkin Park has brought their steady flow to the alternative genre.

Co-frontman Mike Shinoda is a freaking crazy musician. If you were to bottle “Essence of Shinoda,” it would smell like how Disneyland feels to an eight year old. He relieves Bennington of his screaming duties, granting him a break from his outrageous vocal abilities. “Let me see you put one fist up just like this,” Shinoda says before the band plays “Waiting For The End,” a reggae beat based song that evokes the feeling of Ray-Bans, top-down convertibles, and a long stretch of palm trees in your rearview mirror. It seems as though every time you blink, Shinoda is in a new spot. Look, up on the stage. It’s a pianist. No – a guitarist. Not quite – a rapper. It’s Mike Shinoda.

They perform with the same energy they carried during last year’s VMA performance atop Griffith Observatory. Which is a lot. “We want to thank you guys for being patient with us and coming back here tonight,” says Bennington. Anytime.

No Replies to "Linkin Park at AAC, Dallas: A Night Terror Delivered Via Subwoofer Meets The "Essence of Shinoda""