After an Anti-Semitic Episode, a March With a Message 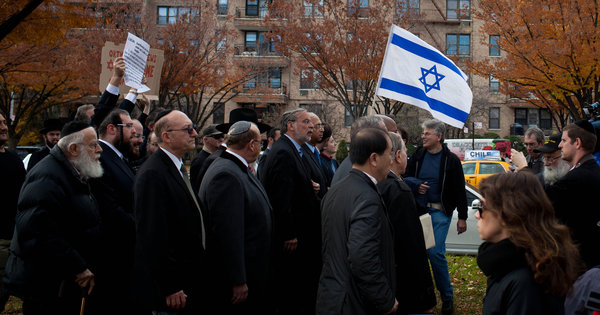 Two days after the sight of flaming cars and anti-Semitic graffiti horrified a heavily Jewish neighborhood in Brooklyn, residents, elected officials and others took part in a march on Sunday against hatred and intolerance.

The police were still investigating the burning of three parked cars on Ocean Parkway and the spray-painting of swastikas and anti-Semitic slurs on benches and the initials “K.K.K.” on the side of a van. The police are treating the episode as a hate crime. No arrests had been made by late Sunday afternoon.

The images of vandalism contrasted with the leafy streets of Midwood, an area with many single-family homes with front yards and driveways.

“I’m shocked it happened here, on my block,” said Ayton Eller, who carried an Israeli flag to the afternoon rally. “Can you believe it?”

The march, which took place on Ocean Parkway from Avenue I to Avenue L, drew scores of residents, as well as several elected officials, including Assemblyman Dov Hikind; State Senator Eric Adams; the public advocate, Bill de Blasio; and Letitia James, Brad Lander and Jumaane D. Williams, all members of the City Council from Brooklyn.

A contingent of protesters from Occupy Wall Street also participated.

“Today it was about getting together,” said Mr. Hikind, who lives two blocks from where the cars were burned. “When it comes to incidents like this, we are one.”

“With the swastikas, with the K.K.K., all together it paints a very ugly picture,” Mr. Hikind said. “If it was only the swastikas, we would be upset. But when you add the violence, it adds another dimension. I don’t remember anything like it in the 29 years I’m in public office.”

The episode revived painful memories for many residents of Midwood, which Mr. Hikind said had one of the largest populations of Holocaust survivors of any city outside Israel. He added that he was thinking of his 90-year-old mother, who lives in Midwood and spent time in the Auschwitz concentration camp.

For Sara Ruto, the desperate yearning for electricity began last year with the purchase of her first cellphone, a lifeline for receiving small money transfers, contacting relatives in the city or…

5 Things You Shouldn’t Say to a Recent College Graduate

No Replies to "After an Anti-Semitic Episode, a March With a Message"