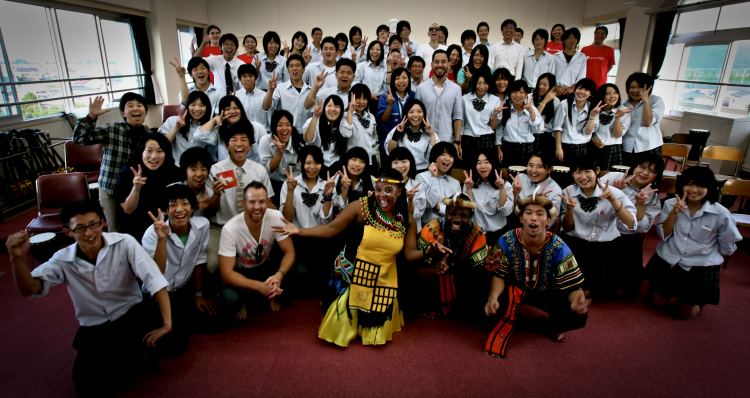 Honoring the six month anniversary of the earthquake and tsunami that devastated the northeastern coast of Japan, Linkin Park visits children affected by the disaster in Ishinomaki, accompanied by international children’s agency Save the Children.

Within days following the disaster, Linkin Park launched a massive fundraising campaign through Music for Relief, with all proceeds going to Save the Children’s relief and recovery efforts in Japan.

Six months later, Linkin Park was on the ground in the north-eastern town of Ishinomaki to witness first-hand how children are coping, and see how Save the Children’s efforts are making a difference in the recovery process.

The first stop was Taizen elementary school, where band members met the principal and listened to his story of what it was like for him and the kids at his school the day the disaster struck. The band then went up to meet with the children in grade 6 who have been practicing their emergency drills, now with new disaster-preparedness hoods given to them by Save the Children. Linkin Park band members Chester Bennington, Mike Shinoda and Dave Farrell got to try on the disaster hoods and learn how these help protect children from falling debris and possible fires – reducing the risk that children face when disaster hits. As some 20% of the world’s earthquakes take place in Japan, preparing for the next disaster is a key component to keeping children safe. Band member Mike Shinoda then visited the school’s child-care center, for kids aged 6-9, where he got to see some of the materials Save the Children has provided the center – including back-to-school kits and backpacks, games for the children, and emergency kits with flashlights and other essential items to help protect children in the event of a future earthquake or tsunami.

The band members then headed to Ishinomaki Kita High School, where they were greeted by a group of excited fans. The band toured the campus, and joined in a music class with the students, witnessing first-hand how music and play can bring joy to those recovering from a major natural disaster. In a workshop led by Save the Children partner “Drum Café”, the teens and the band members were given tam-tams and challenged to follow the rhythms of the Drum Café percussionists.

“It was incredible to see firsthand the happiness in the students’ faces, despite the hardships they have endured for the past six months,” said Shinoda. “It was an honor to represent Music For Relief and our supporters worldwide on this visit, bringing their good wishes to the young people still recovering.”

Six months after the earthquake, although children’s immediate needs have been met, the longer-term recovery is a process that will take years, says Save the Children. “The first six months are only the beginning. From our experience responding to disasters around the world – from Katrina and Christchurch, to Pakistan and Haiti – we know that recovering from a natural disaster of this scale is a long process that entails much more than brick and mortar. Children and their communities need to recreate their social links and cope with the emotional wounds left behind by the disaster,” said Save the Children CEO Hironobu Shibuya. The organization has launched a five-year recovery program, funded by generous contributions from donors around the world, including Linkin Park’s Music for Relief. “Linkin Park’s visit has been so important to us in highlighting the longer-term needs of children in recovering from this disaster, and helping our donors see the impact our response has had to date.”

Music for Relief was created by Linkin Park in 2005 to provide aid for those affected by the Indian Ocean Tsunami, and has since raised over 4 million USD towards humanitarian relief efforts.

Save the Children has been working in Japan for 25 years, and responding to children’s needs in emergencies around the world for over 90 years.

This is your chance to own a custom artwork skateboard deck signed by all of the members from Linkin Park. The deck was signed by Chester Bennington, Rob Bourdon, Brad Delson, Dave Farrell, Joe Hahn,…

Happy 1st Anniversary To Myself!