Two days ago, Linkin Park rocked their hometown Los Angeles – one of many dates of their North American Tour 2011. There have been a lot of good reviews, but what about all those people that went there and didn’t write lengthy reviews on their blogs? One medium that captures single moments in the life of us “regular” people (and the “un-regular”, too, sometimes) is Twitter. So here is the first (at least the first I know of) concert review in Tweets! Follow all those people, because they must be cool – they were at a Linkin Park show! 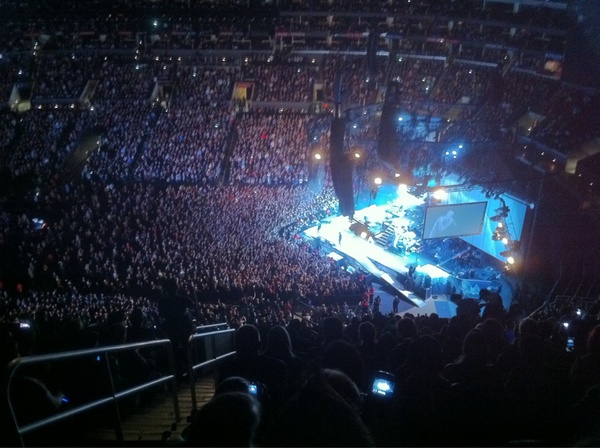 Chester and Mike handled it at staples tonight! @linkinpark killed it!!! http://yfrog.com/h4awcyhj

LA was so fucking awesome!!!! I had so much fun tonight.. Best crowd we've ever had in LA tonight! Thank you!!!

Went to the Linkin Park concert at the Staples Center in LA yesterday. They are seriously awesome in person, best concert ever!

Yess! Had an amazing time, Linkin Park blew the roof off of Staples! RT @MaryLexia: Had a blast last night at Linkin Park with @DeeJayHem :]

Prodigy opening for Linkin Park at Staples starts off w/ smack my bitch up, all downhill from here http://yfrog.com/gz1ccmj

Can't believe I'm about to go home for a vacation, feels like its been too long!!! Linkin Park at Staples Was Amazing, Last Night, Really!!!

@linkinpark @m_shinoda Just saw Linkin Park Concert at the Staples Center!!!!! My 2nd concert and It was awesome!!!!! You rock guys!!!!

Staples Centre is rocking tonight and we're here to support dance/punk Prodigy royalty in the face of 50,000 Linkin Park fans!

Photo: With Nicole a Alvarez of KROQ At Linkin Park At Staples Center 2/23/11 Gary Tovar http://tumblr.com/xu61lhwug9

Photo: With my Son Drake in Cap and friend Daniel. back stage At Linkin Park at staples Center LA 2/23 /11… http://tumblr.com/xu61ligd8t

Linkin Park at Staples are rocking the stage! OMG

2 Replies to "Linkin Park At Staples Centre, Los Angeles - A Review in Tweets"