Death Penalty, Yes or No? Vote!

I’ve just read an amazing article about the Death Penalty in India and like its author I’m totally against all forms of Capital Punishment. Still, I am interested in what my readers are thinking about this topic, so I made a poll where you can vote for or against the Death Penalty. Of course the voting is totally anonymous, so don’t worry about me seeing your name/IP address or anything like that.
Please leave a comment here if you want to say something more about this issue. Below you can find “Reasons against the death penalty” with a few comments by me and also the article I mentioned above. 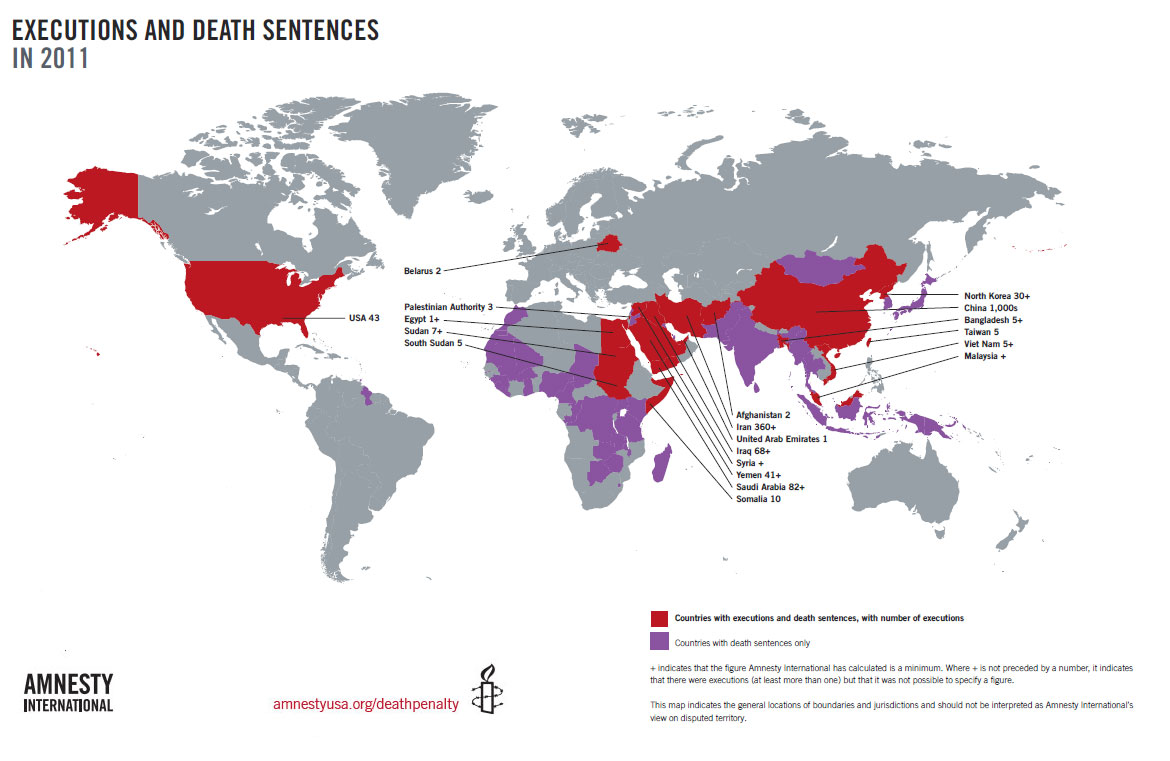 Reasons against the death penalty (by antideathpenalty.org)

1. Executions cost more than life in prison.
$2 million per person vs. $500,000 (4x as much!). Free counsel for defense, for appeals, maximum security on a separate death row wing.

2. The innocent may be wrongly executed.
Since the DP was reinstated in 1976, 82 inmates have been freed from Death Row. That’s 1 Death Row inmate found to be wrongfully convicted for every 7 executed.

3. Is not a deterrent; crime rates have not gone down.
In fact, the murder rate in the US is 6 times that of Britain and 5 times that of Australia. Neither country has the DP. Texas has twice the murder rate of Wisconsin, a state that doesn’t have the DP. Texas and Oklahoma have historically executed the most number of DR inmates, yet in 2003 their state murder rates increased, and both have murder rates higher than the national average. (Adie: Also don’t forget that pedophiles, rapists, etc. are driven to their crimes by their sick lust, which cannot be deterred by the death penalty! Those people are mentally ill and don’t consciously think about their crimes when they commit them. They just do what they feel like doing. This is why I always think it’s pretty stupid that people want to get rid of pedophilia via death penalty. It won’t work! In my opinion the best way to safe our children is to give pedophiles the possibility to get help. Unfortunately our society is so condemning of their crimes (which is totally reasonable!!!) that they usually keep it a secret. There are cases though, where pedophiles have entered therapy which kept them from commiting an awful crime. Of course this doesn’t apply to all of them, but it’s a new direction that could help to keep those crimes down to a minimum.)

7. Many Death Row inmates were convicted while being defended by court-appointed lawyers who are often the worst-paid and most-inexperienced and least-skillful lawyers.
The American Bar Association published guidelines for a good defense in a death penalty case: (a) attorneys with prior experience working a capital case, (b) 2 attorneys, 1 investigator, 1 mitigation specialist, and (c) fully funded to pay for travel, private eyes, evidence testing and other things needed to investigate the case. Yet no state meets these standards. And few states pay their state-appointed lawyers well enough to retain competent, effective lawyers.

10. Promotes killing as an OK solution to a difficult problem. (Adie: This just shows how lazy and uncreative people can be. Death penalty is so much easier than to actually deal with the problem)

11. Death sentences are handed down arbitrarily, not in a fair manner.
Serial killers such as the infamous Gary Ridgway in Seattle who admitted killing 48 prostitutes and runaways got life in prison. An “angel of death” nurse in NJ who admitted killing 17 people got life. Meanwhile, mentally ill and impoverished murderers who could not afford good lawyers and did not warrant much media attention were given the death penalty. In Alabama, David Hocker was executed after a one-day trial. His mental illness was not sufficiently described to the jury. Alabama also executed a 74-year-old man (James Hubbard) who had been on DR for 27 years and was beset by medical problems which would have probably soon caused his death by natural means: cancer, high blood pressure and the early stages of Alzheimers. In Texas, a man with schizophrenia was executed (Kelsey Patterson) even after the Board of Pardons and Paroles recommended clemency after learning of his time spent in mental hospitals and his unintelligible rambling.

Capital Punishment: Time for India to do the right thing

He may have spoken those words almost two centuries ago, but they holds true even today. Lifestyles, relationships, opportunities and comforts may have evolved over years but there is a limit to which human conscience can change. And it is to that innate conscience that we must ask the one question that has been so widely debated over especially in the last half a decade. Isn’t it time to well and truly abolish the very principle of Capital Punishment?

Capital Punishment has never been a solution – it is neither just nor humane. © Google Images

Some may call it Death Penalty. Whatever you name it, Capital Punishment is the lawful imposition of death as punishment for criminals. A morbid and heinous principle that violates one of the most valuable pronouncements in life: Article 5 of the Universal Declaration of Human Rights that says “No one shall be subjected to torture or to cruel, inhuman or degrading treatment or punishment.”

Internationally, there is an increasing trend towards abolition, with 96 countries doing away with it. The Indian judiciary has not carried out an execution since 2004, when when Dhananjoy Chatterjee was hanged after being convicted of raping and murdering a schoolgirl.

However, the Indian government has always shown an inclination towards not taking that final (the right, albeit risky) step and abolishing Death Penalty for good. It may be due to the fear of a backlash from the countless number of “social experts” in the country. What we must realise though is that this is a country with a population of 1.2 billion and someone is going to be unhappy no matter what.

So why is it necessary for us to take the decision against Capital Punishment? Afterall, isn’t it widely felt that the mere threat and fear of Capital Punishment will act as a deterrent in most crimes? Fact is, no one know for sure whether or not this is the case. People who commit crimes dont do it because of lack of knowledge about the consequences. They do it inspite of that knowledge, because that is how criminal philosophy works.

Also, no judicial systems around the world is flawless; there is more than a possibility that someone will be punished wrongly, and irrevocably. If anything, this is the risk that is not worth taking.

Furthermore, we should kill the crime, not the criminal. Just like two wrongs do not make a right, killing in response of killing simply perpetuates the cycle of violence. A punishment is not a punishment until it brings out repentance. Capital Punishment gives no opportunity for repentance.

No Replies to "Death Penalty, Yes or No? Vote!"