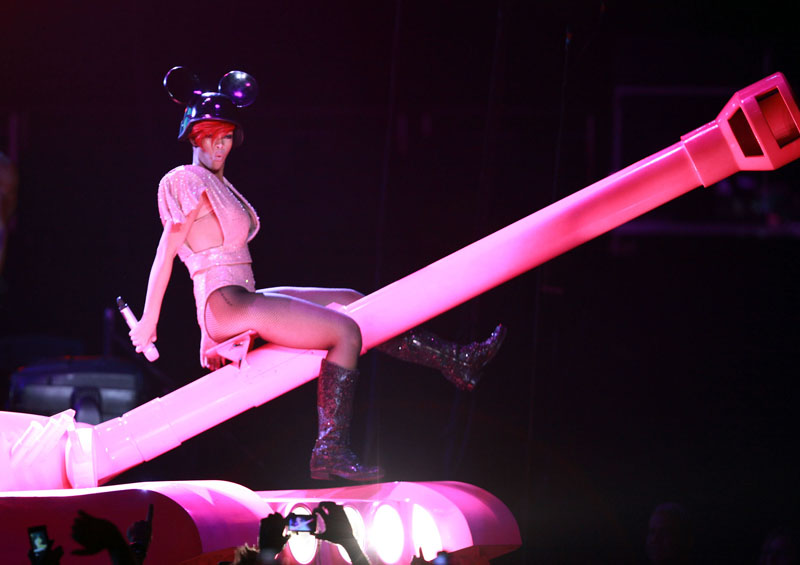 Thanks to Mr. Bobbie Bloomfield from Does it offend you, yeah? I've found this amazing article about the mind control attempts of Mickey Mouse and his friends:

Mickey's mind control The latest photo shoots of young TV and music stars reveal some sort of obsession with Mickey Mouse accessories. And there's definitely no danger of running out of these pictures anytime soon. Tons of them appear in the media every week. Lady Gaga and Beyonce's "Telephone" video clip feature scenes where they're wearing Mickey Mouse hats, sunglasses and minnie mouse trademark lips. Selena Gomez's "Kiss and Tell" album cover features her with Minnie Mouse lips. It has been claimed that Mickey Mouse ears or designs often occultly refer to mind control. According to Wikipedia encyclopedia, The Mickey Mouse Club is an American variety television show that began in 1955, produced by Walt Disney Productions and televised by the ABC, featuring a regular but ever-changing cast of teenage performers. The Mickey Mouse Club was created by Walt Disney. The series has been revived, reformatted and reimagined several times since its initial 1955-1959 run on ABC. ...
Read More 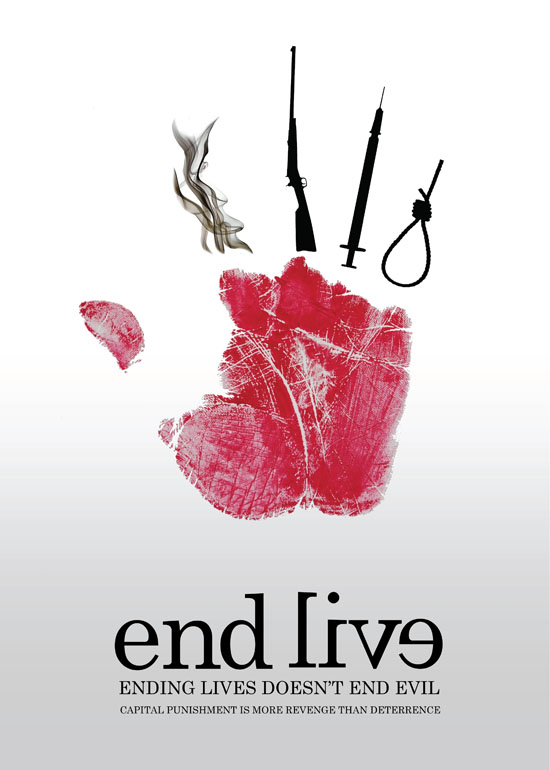 Don Heller: A California Republican against death penalty By Don Heller, Columnist I have been a Republican for many years. I wrote the ballot initiative that reinstated the death penalty in California in 1978. I believe those who commit willful and intentional murder should be locked up and severely punished in the interest of public safety. I made a terrible mistake 33 years ago, but it is one that can be corrected. People are working hard to give voters the opportunity in the next election to replace the death penalty with life in prison without possibility of parole. If given that chance, I call upon all Californians to join me in voting yes to abolish capital punishment. I have not gone soft on crime. I believe that public safety is one of the primary purposes of a government predicated on the rule of law. Justice should be swift and certain. But the death penalty initiative that I drafted was drawn up without fiscal study, input from others, or committee hearings. I made sure that the legal structure that I created would meet tough constitutional standards and checked my work against relevant U.S. Supreme Court jurisprudence. But there was none of the give and take envisioned by our forefathers when they created the legislative process more than 200 years ago. Essentially, I wrote alone and the fiscal impact was never considered by the sponsors or myself. ...
Read More

Happy 1st Anniversary To Myself!

One year ago, I've read something really interesting on Mike Shinoda's blog and wanted to comment ...
Read More

Never Forget The Victims Of 9/11 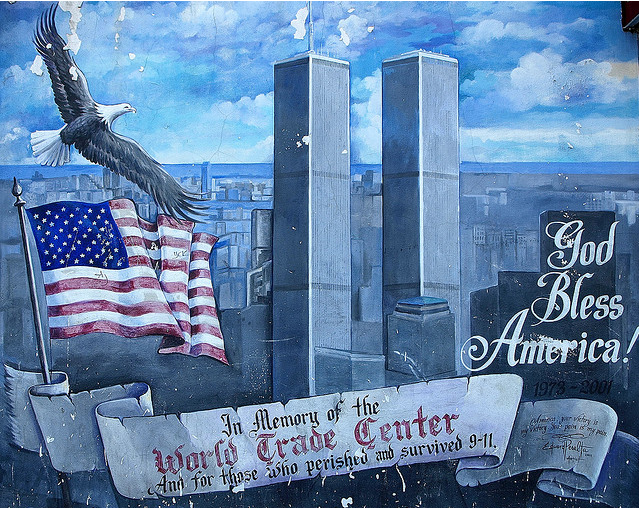 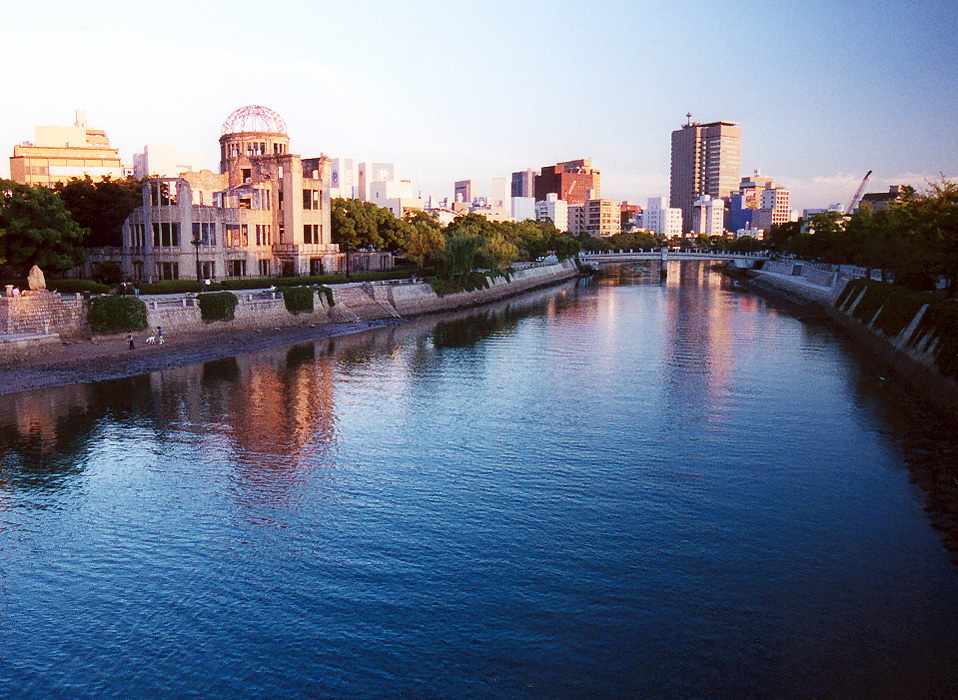 Since today marks the 66th anniversary of the dropping of the atomic bomb in Hiroshima, here is a special post about probably the biggest humanitarian catastrophe in history. Between 150,000 and 245,000 people died after the U.S. dropped the atomic bomb "Little Boy" on Hiroshima, on August 6, 1945 and only three days later "Fat Boy" on Nagasaki. On August 15, Japan surrendered to the Allied Powers which officially ended the World War II. To this day, the ethical justification of the atomic bombing is still debated. Read this article for more information. Do you think the use of the atomic bomb was justified, because it ended the war quickly? In my opinion, what happened in Hiroshima and Nagasaki is probably the most horrible crime against humanity ever committed. As a History student I am always confronted with the big question "Do we learn from History?" and since I am a quite realistic person I always answer it with a clear "No." as there are always new wars and new reports of violence and murder in the news. Still, catastrophes like the bombings of Hiroshima and Nagasaki force us to at least try to learn from History. Always remember what happened this day 66 years ago in Japan, as well as the Holocaust in Germany, the Genocide in Armenia, in Rwanda and anywhere else people are killed for politics, ethnical differences, religion or any other reason! A few months ago I was incredibly lucky to get the opportunity to talk to a survivor of the atomic bomb in Hiroshima. Even though I've known all the facts about the bombing from school and University, it was on this day that I realized for the first time the extend of the catastrophe and gained insight into the people's experience of the bombings. I have found this incredible article about a man who didn't only survive the bombing of Hiroshima, but also of Nagasaki:

It will go down as one of the most inspiring survival stories ever to emerge from a horrific war. Tsutomu Yamaguchi was in his twenties when he found himself in Hiroshima on the morning of 6 August 1945, as a single B-29 US bomber droned overhead. The "Little Boy" bomb that it dropped from its payload would kill or injure 160,000 people by the day's end. Among them was the young engineer – who was in town on a business trip for Mitsubishi Heavy Industries – who stepped off a tram as the bomb exploded. Despite being 3km (just under two miles) from Ground Zero, the blast temporarily blinded him, destroyed his left eardrum and inflicted horrific burns over much of the top half of his body. The following morning, he braved another dose of radiation as he ventured into Hiroshima city centre, determined to catch a train home, away from the nightmare. But home for Mr Yamaguchi was Nagasaki, where two days later the "Fat Man" bomb was dropped, killing 70,000 people and creating a city where, in the words of its mayor, "not even the sound of insects could be heard". In a bitter twist of fate, Yamaguchi was again 3km from the centre of the second explosion. In fact, he was in the office explaining to his boss how he had almost been killed days before, when suddenly the same white light filled the room. "I thought the mushroom cloud had followed me from Hiroshima," Mr Yamaguchi said.

The Draft Ends in Germany, but Questions of Identity Endure

BERLIN — Germany formally discontinued the draft at midnight on Thursday to make way for a smaller, tighter army that will draw people like Johannes Beckert and Steven Stadler, both volunteers signing up for duty at a sprawling, suburban recruitment center that once housed the East German military’s overseas espionage agency. The two men are part of a military evolution spanning more than half a century, from rearmament in the divided Germany of the 1950s through the cold war, which placed hundreds of thousands of young German soldiers on either side of the Iron Curtain, and on to a reunification that was not just geographic and political but also created a single army bonded by conscription. They are part, too, of a long-running German quest for antidotes to its Nazi past, ensuring that its military is subservient to the will of a democratic Parliament....
Read More

As Their Work Gains Notice, These Painters Suffer for Their Art

Very interesting article from the Wall Street Journal. Those police officers crack me up! Apparently Risky's bus motivate other graff artists to paint on buses...because they've never done that before. XD

Work by artists Revok and Rime is part of an exhibition at MOCA in Los Angeles. The artist known as Revok is in an L.A. jail on charges related to a graffiti incident.

LOS ANGELES—To the Los Angeles Museum of Contemporary Art, Revok is a renowned artist whose bright, sprawling work is worthy of display in its latest exhibit. To the Los Angeles County Sheriff's Department, Revok is Jason Williams, also known as inmate No. 2714221. Last month, Mr. Williams was sentenced to 180 days in county jail as a result of a probation violation from a graffiti incident, just days after the opening of a major museum exhibit dedicated to "street art" that features his work. Unable to post his $320,000 bail, Mr. Williams sat in jail for four days before the sentencing. It may be illegal on the street, but inside the Los Angeles Museum of Contemporary Art, a new exhibit celebrates the history of graffiti, featuring work by artists like Banksy and Shepard Fairey. WSJ's Tammy Audi reports. Law-enforcement officials around the country are prosecuting graffiti artists with harsher sentences than ever, pushing for felony charges, real prison time and restitution payments as they seek to wipe graffiti from the streets. At the same time, the art world and corporations are embracing the form like never before. "You can make a case that graffiti and street art is the most influential art movement since the great innovations of the '60s," says Jeffrey Deitch, director of the L.A. museum, known as MOCA. "Before this show, no American museum had ever done an ambitious historical exhibition."...
Read More

Scores of government critics, lawyers, activists, bloggers, artists and "netizens" have been arrested since February, amid government fears of a "Jasmine Revolution" inspired by events in the Middle East and North Africa. Amnesty International profiles some of the new generation of Chinese activists caught in the sweep.

Liang Haiyi aka Tiny: Early victim of the "Jasmine Revolution" crackdown Status: In detention on suspicion of "subversion of state power" In her own words: "When the country cannot protect a beggar, it cannot protect the emperor! Liang Haiyi was reportedly taken away by police on 19 February in the northern Chinese city of Harbin for sharing videos and information about the ”Jasmine Revolution” on the internet. Her lawyer confirmed she was detained on suspicion of “subversion of state power”. ...
Read More